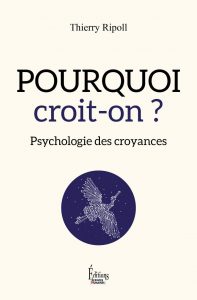 Why do we believe? Psychology of beliefs, by Thierry Ripoll – Editions Sciences Humanes, December 2020 – 391 pages

We often forget that humans are distinguished from other animal species by their propensity to believe in the existence of a supernatural world. Thus, behind the banality of an immediately accessible reality, there would be a properly spiritual world endowed with forces which escape us and which nevertheless powerfully influence our lives. The taking into account of this hidden reality would be likely to give a direction to our existence, to make it more acceptable and more controllable… We are there in the universe of the belief.

In this book, Thierry Ripoll, Professor of Psychology at the University of Aix-Marseille, tackles the fascinating and disturbing task of identifying the psychological and brain processes that lead us to believe a multitude of things (simple superstitions, belief in the existence of non-material energies, power of rituals and prayers, extrasensory capacities, religious beliefs, conspiracy theories…). These processes, for the most part unconscious, spare no one, not even those who display radical skepticism. To varying degrees, beliefs always find a space to develop and often unknowingly condition our lives, our decisions, our choices and our relationship to the world.

While there is no doubt that beliefs are natural responses to the inherent difficulties that everyone encounters in their life and if they partly contribute to our psychological balance, they nonetheless constitute formidable springboards for potentially behavior. dangerous for the believer as well as for the society in which he lives. Understanding its origin is therefore essential. In this informative and biting book, Thierry Ripoll sheds new light on this thorny and socially crucial subject.

Thierry ripoll is Professor of cognitive psychology at the University of Aix-Marseille and member of the Laboratory of Cognitive Psychology. His research concerns several major areas of psychology (reasoning, memory, perception, attention). At the same time, he was interested in intuitive philosophical representations of the mind / brain relationship. He is notably the author of From mind to brain (ed. Sciences Humaines, 2018).