Tourism that was so fashionable in the 90s, although it was in the 60s when it began to become popular in Spain, has once again gained followers attracted by the feeling of freedom that contribute. Even in recent months, many have chosen it as a lifestyle due to the urgent need to be in continuous contact with nature. For the second consecutive summer, this means of transport is presented as one of the favorite options for many travelers. The security, independence and ease of improvisation offered by carrying the accommodation, help to access the most unknown nature and keep your distance imposed by the pandemic. 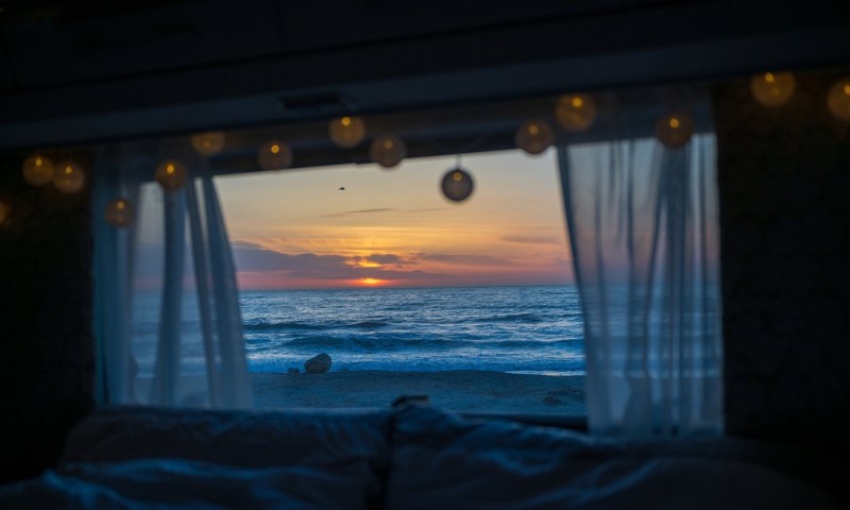 
The great diversity of landscapes that our country offers from north to south and from east to west makes this type of trip an unforgettable experience to get where we want. A great proposal in which the time and the route are determined by oneself.

The first step before embarking on the adventure will be to choose the most appropriate option for the trip we want to make: caravan, camper or motorhome. The latter is the most complete and comfortable proposal, as it is governed by the General Driving Regulations, so it will be easy when parking. Other details to take into account are the age, size and equipment of the vehicle.

It is also essential to find out about the legislation regarding caravans that applies to each territory when camping. If your idea is to simply park the motorhome, without actually deploying awnings, chairs and tables, you will be able to do so in most of the designated spaces, always fleeing from large cities, tourist areas and national parks. Although, to avoid problems, it will be advisable to look for a camping or a caravan area, either paid or free. For this, they are useful applications such as Park4night, Motorhomes on the Road or Camperstop. Another consultation platform that can be practical is @caravaningtv, an outdoor tourism TV channel with news and news in caravans, motorhomes and campsites. 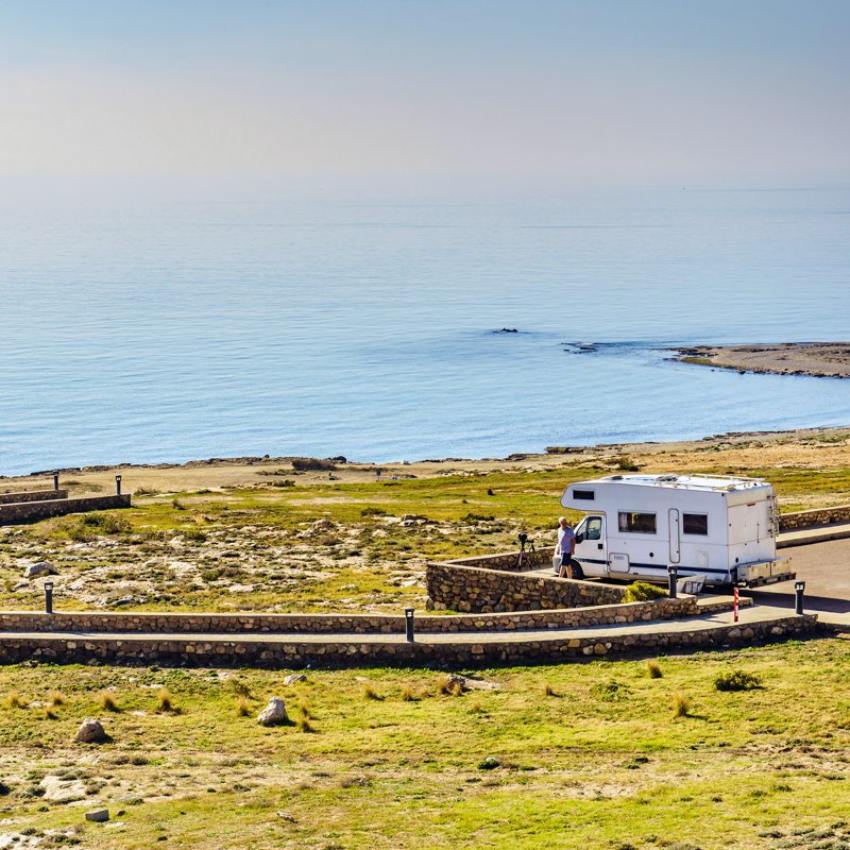 
Once the differentiation between camping and parking has been made, a good option may be to alternate parking lots with areas prepared for caravans, in order to have services such as electricity. There are campsites very adapted for caravans that are great alternatives to rest a few days from the road and enjoy the complete facilities they offer, such as the Montroig Beach (playamontroig.com), on the Costa Daurada, or, in Portugal, Ohai Nazaré (ohairesorts.com/nazare/es), a few kilometers from the fishing village shared with surfers, which has swimming pools, a spa, paddle tennis courts and even a water park.

ROUTE THROUGH THE BASQUE COUNTRY

Touring the Basque coast, and then entering its lush rural landscapes, can give us a very varied perspective. The route will depart from the town of Hondarribia, on the border with France, and will continue through San Sebastián, Zarautz beach -a favorite among surfers- and Guetaria, a delicious stop to taste the famous gastronomy of this land. In this first stage we will be able to park in the Abendaño motorhome parking, on the outskirts of Zarautz.

Don’t miss it: New (and stylish) places that everyone is talking about in San Sebastián

In the province of Bizkaia, we will recreate for a few days in the sandy areas, marshes and mountains of the Urdaibai Biosphere Reserve. As a starting point to get to know this whole area, the Portuondo campsite (campingportuondo.com), in the town of Mundaka, first class and with panoramic views of the reserve is the place. 
The fishing village of Bermeo, the beach of Sopelana or the hermitage of San Juan de Gaztelugatxe, defying Cantabrian waves, are also essential stops on our route along the coast. When we arrive in Bilbao we will be able to park at Bilbao Hostel (bilbaohostel.net), within the garden area of ​​the building, which admits 8 vehicles, which have access to water, electricity, Wi-Fi, sports and games. From Bilbao we will depart inland to enter, through winding mountain roads in the unknown region of Encartaciones, where we will be surprised by Torre Loizaga and its impressive collection of vintage and classic cars, the Pozalagua cave or Balmaseda, the first town in Vizcaya. In this region, the quiet parking of Zalla motorhomes, located next to an urbanization of small houses, will be the most practical.

FROM THE PYRENEES TO THE COSTA BRAVA

In the province of Girona, La Garrotxa keeps the beautiful medieval towns of Besalú, Beget or Santa Pau among its volcanic landscapes, offering an excellent opportunity to get lost on secondary roads that connect the Pyrenees with the Mediterranean. In this way, our route can be extended to the interior, where we will park the motorhome in Ribes de Freser, next to the river near the station, to go up to the Núria Valley by train, or continue to the Costa Brava to look for the inspiration from Dalí in Cadaqués. At this point we will want more sea, so we must continue, along a zigzagging road, towards Cap de Creus, Roses, Empuria Brava and L´Escala. Along this itinerary, we will find campsites with all kinds of facilities. Can Banal (campingcanbanal.com), in Montagut i Oix; Ecològic Lava (campinglava.com), in Santa Pau, or Riembau (riembau.com), in Platja d´Aro, third, second and first category respectively, are examples of this. 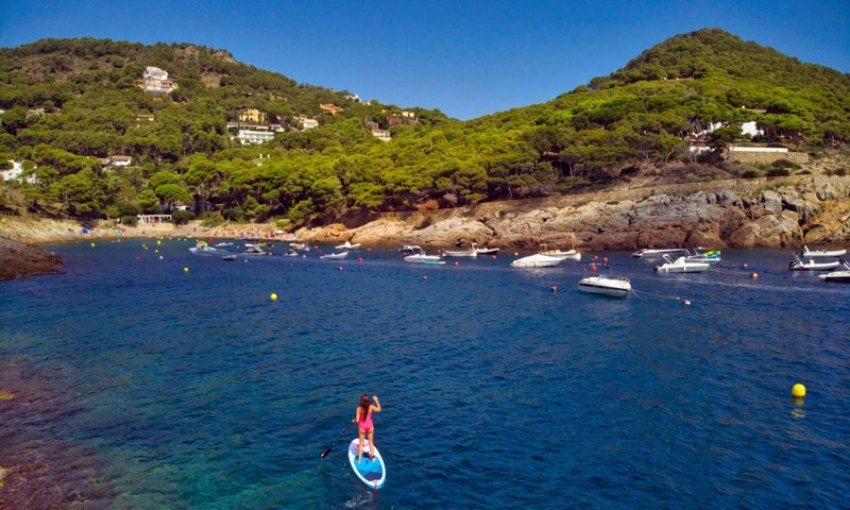 
Do not miss it: Costa Brava, what a madness of beaches!

BETWEEN WHITE PEOPLES BY GRANADA

Granada is another great destination to combine sea and mountains. In addition, it has charming villages, such as those of the Poqueira ravine, in Granada’s Alpujarra, included in the network of The most beautiful towns in Spain: Bubión, Capileira and Pampaneira. The road that leads to them offers beautiful views of the Alpujarra and its white municipalities guarded by Sierra Nevada. But the routes that can be done through this province are as diverse as its landscapes. Among all of them, the one that always leaves its visitors, repeaters or novices speechless: the Alhambra and the Albaicín. In front of the great Nasrid monument we find a parking (parkia.es/aparcamientos/parking-la-alhambra-granada) with places for caravans that will be very convenient to later explore the city on foot.


Don’t miss it: Excursions less than an hour from Granada

The contrasts of the Navarrese lands are the most unexpected, from the green mountains of the Navarrese Pyrenees, where the Irati Forest, to the deserted and imposing Bardenas Reales. Starting from the north, in addition to walking through Irati and being surprised by towns like Ochagavía, we can let ourselves be enchanted by the witches in the caves and the museum of Zugarramurdi and continue with the magic in the Baztán valley, stopping at Elizondo and the Señorío de Bertiz Natural Park. On the way south, in addition to knowing the heritage of Pamplona, ​​we will stop in natural places such as the Foz de Lumbier or the Nacedero del Urederra, known for its turquoise waters.

When camping, Camping Bardenas (campingbardenas.com), Camping de Olite (campingdeolite.com) and Camping Osate (campingosate.net), in the Salazar valley, are three of the 25 that Navarra has next to its places of interest.

Do not miss it: From the Irati jungle to Olite, the ten essentials of Navarra

Between the Canaries, Fuerteventura is the best prepared of its islands to receive caravans, thanks to its huge spaces of nature surrounded by beaches and volcanoes. Do not expect to find traditional campsites, because we are in one of the few places in Spain where camping prevails next to paradises such as Cofete or Piedra Playa. However, in Pozo Negro, in the municipality of Antigua, there is a camping rustic with toilets, electricity and water. Water sports are one of the main concerns of families and travelers who visit the island.

Other islands have some camping official for motorhomes, like the one in Papagayo, in Lanzarote, open only in the summer season. 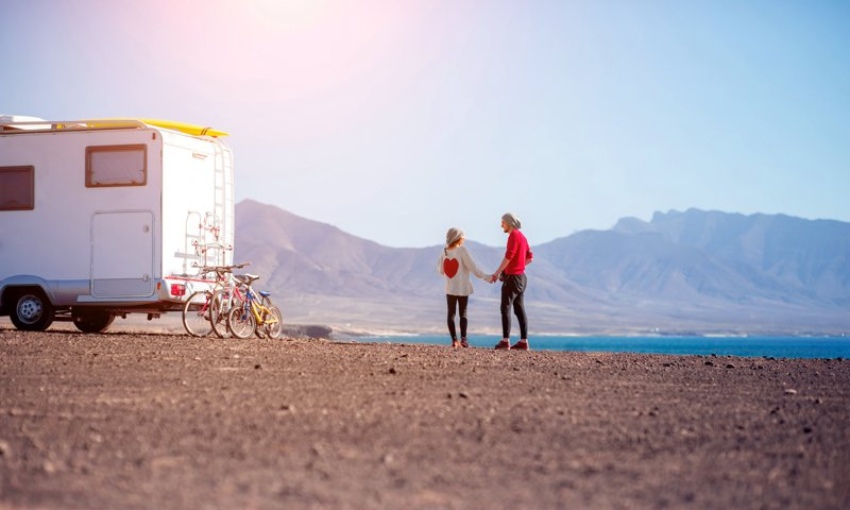 
Do not miss it: Car route through Fuerteventura, the island of paradisiacal beaches and much more

BY THE PORTUGUESE VICENTINE COAST

We jump to the neighboring country to tour one of its best caravan routes, the Southwest Alentejo and Costa Vicentina Natural Park, spanning from São Torpes beach, in Alentejo, to Burgau, in Algarve. Whitewashed villages, kilometers of empty beaches and rivers where river and marine baths converge, delight this route that seems prepared for lovers of caravanning. Among the must-see stops we find the towns of Porto Covo, Vila Nova de Milfontes or Zambujeira do Mar, overlooking cliffs. Unforgettable are the sunsets at Cape San Vicente and Cape Sardao. 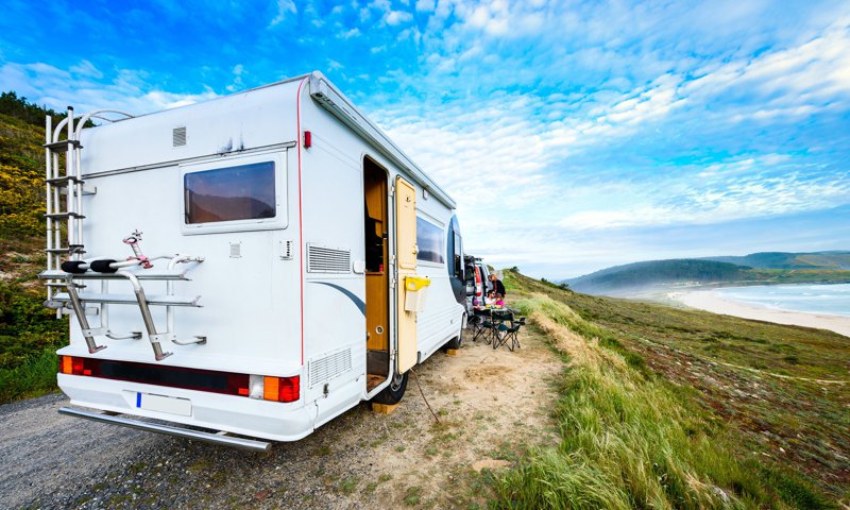 Do not miss it: Portugal in ten wonders that surely are not the ones you know