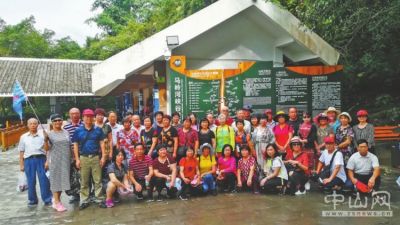 The starting group took a group photo during the tour.

The first trip of the 5-day double-action Zhongshan Daily Reader Group of "Wumeng Prairie Hanging on the Horizon", exclusively planned by this newspaper, has set off on September 5. The rich itinerary and colorful scenic spots were praised by many readers and friends participating in the group. The reporters sent by our newspaper along with the group provided thoughtful service to the group members, and at the same time recorded every wonderful moment of the trip.

"The group members all sighed that this time the reader group's itinerary was very thoughtful and cost-effective. Not only was it very rich, there were no shopping spots, and there were many essential attractions, but the atmosphere of the whole group was particularly happy and harmonious." The reporter accompanying the group responded.

The 75-year-old Mr. Luo Xianwu is a reader group friend. It is the fourth time that he and his wife have participated in the Zhongshan Daily Reader Group tour. He told reporters: "The reader group’s route arrangement is reasonable, and food, lodging and play are arranged well. It’s very thoughtful, we can play very easily, and we don’t have to be restricted by time.” He also said that both of them love to travel very much, and they have to travel three times a year. This year, affected by the epidemic, they have long been "grassing grass." "I am very happy to come out to play this time. "On weekdays, if you drive with your son and grandson by car, you have to wait for them to have a holiday before you can go out. Unlike this, you can go there whenever you want."

Aunt Liang Lianhuan from Xiaolan, 55 years old this year, signed up for the reader group with 6 relatives this time. She happily told reporters: "This trip feels very worthwhile, the service is also considerate, and the route arrangement is reasonable. Very happy."

In the next two days, the readers will also go to the "Guizhou Qinglong Stilwell Twenty-Four Daoguai Ruins Park". During the Anti-Japanese War, it was once the main traffic artery of the Allied China-Burma-India theater and was known as the lifeline of the War of Resistance. The group members will also enjoy the Guizhou Xingyi Eight-Bowl Featured Banquet and Guangxi Baise Farmhouse Banquet, and enjoy the beautiful and delicious food.

It is understood that the Zhongshan Daily reader group will launch more exciting routes and look forward to your participation.

Many group members asked the reporter where they plan to go for the next issue of the reader group activity, saying that as long as it is the reader group activity organized by this newspaper, they will participate and will mobilize more relatives and friends to go together. Currently, the "Colorful Guizhou + Charming Xiangxi" Zhuhai-Tongren Shuangfei 4 days pure play reader group route, the third group departing on September 18th and the fourth group departing on September 20th are currently in hot registration.