We had the opportunity to have the Xiaomi Mi 10T Pro in our hands for a short week. By making the bet to drastically reduce its price compared to the Mi 10 Pro at the start of the year with a few compromises, does the brand manage to retain enough arguments on its Mi 10T Pro to make it good value for money? 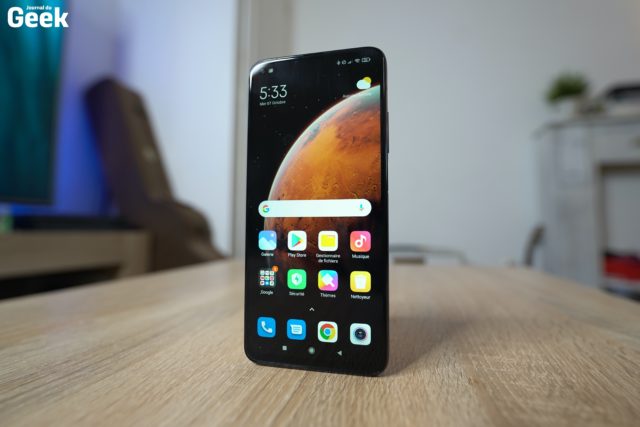 Autumn is synonymous with the arrival of the "T's" for Xiaomi, which recently presented its new Xiaomi Mi 10T, Mi 10T Pro and Mi 10T Lite, logically more evolved versions of its flagships from the start of the year. Except that we will see it together in this test of the Xiaomi Mi 10T Pro – the most advanced in the range – these new "T" s do not represent so much an increase in range but rather a repositioning of prices. The Xiaomi Mi 10T Pro is therefore sold at half the price of the Xiaomi Mi 10 Pro. However, is it half as good? Verdict!

From a visual point of view, the Xiaomi Mi 10T Pro does give the impression of a premium smartphone, at least as much as the Xiaomi Mi 10 Pro launched in early 2020. The brand had indeed taken off at the start. year, and even if we had very much appreciated its Mi 10 and Mi 10 Pro, we were playing in the backyard of Apple, Huawei or Samsung, with the obvious difficulty of making the general public understand that Xiaomi did indeed have its place on this segment. It is therefore after a somewhat brutal introduction that Xiaomi backs off by making some concessions to its Mi 10 Pro in order to drastically lower its price, while still managing to slip in some welcome new features.

The main difference is visible to the naked eye, since it concerns the screen. Unlike the Xiaomi Mi 10 Pro and its AMOLED panel, the Mi 10T Pro has an LCD panel. It measures 6.67 inches and offers a resolution of 2340 x 1080 pixels with 386 ppi. So this is a huge step backwards from the OLED that Xiaomi had previously accustomed us to, even if this LCD screen turns out to be just excellent for what it is. The colors are perfectly accurate and vibrant, we have a particularly efficient reading mode and the brightness is able to go extremely low to comfortably scroll at night. Above all, it is the first so-called "general public" smartphone – excluding gaming smartphones – to offer a refresh rate of up to 144 Hz! For comparison, premium smartphones now run at 90 or 120 Hz, so it's a pleasure to find such fluidity on this device, especially at this price. With MIUI 12 and its messy animations (read our guide), this very high refresh rate and the power available with the Snapdragon 865, the experience is really very pleasant, extremely fluid on a daily basis. However, while this 144Hz refresh rate is very good news, it is still an addition that may seem superfluous in practice. In our opinion, the contribution of an OLED panel rather than an LCD provides greater comfort at such a high refresh rate, which, if it is very comfortable from 60 to 90 Hz, is only anecdotal between 90 Hz and 120 Hz, and even more between 120 Hz and 144 Hz. 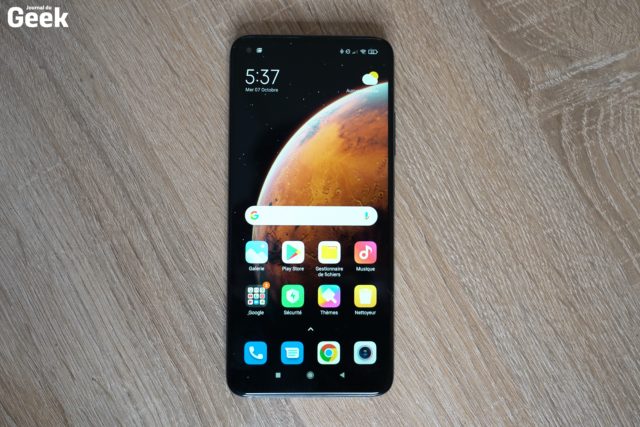 Looking at the rest of this screen, we can still see where Xiaomi has cut in its costs. This panel is totally flat, and more curved like on the Mi 10. On our side, we do not find its disturbing, on the contrary, since this avoids false contacts and makes the grip a bit better. However, this is still a slight step backwards, since we suspect that a flat screen is less expensive to produce than a curved panel. On the other hand, what can be disturbing is this thick border at the bottom of the phone – LCD requires – which taints the general design. Also, we found the brightness to be a bit limited, especially outdoors, unlike that offered on the Mi 10's OLED, which was comfortable in all circumstances. But we quibble, because, we repeat once again, the Mi 10T Pro offers a truly exceptional LCD panel, and a good LCD is better than a bad OLED with disastrous colors. 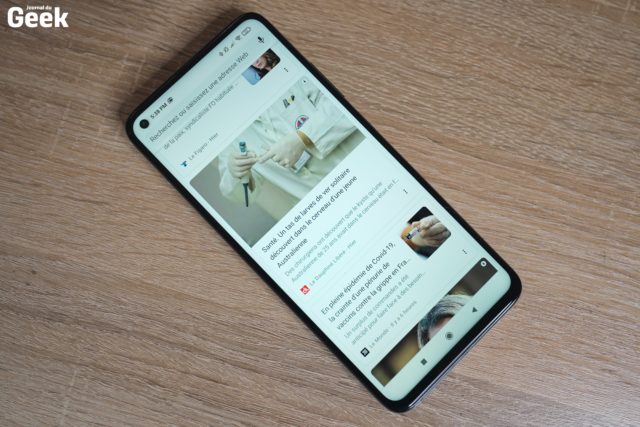 At the back, too, Xiaomi has made significant changes compared to its Mi 10. If we still find a glass back – allowing wireless charging – the photo sensors are now gathered in an imposing photo unit, and more in a vertical line. We find a rather original arrangement largely putting forward the main sensor of 108 MP, located on the upper part of this photo unit, which, like most of its competitors, exceeds very frankly the case. Note that this glass back is extremely reflective, so you could even use it as a mirror or a back when taking selfies captured with the rear camera. But after all, most will soon put a shell in it. Otherwise there is a USB-C port for recharging on the lower edge, which also contains a speaker grille and the slot for the SIM card. On the right side, we have the volume buttons as well as the Power button on which the fingerprint sensor is integrated, since it is no longer located on the screen – LCD requires. On a daily basis, we found this sensor to be very quick to use and rather well placed, making unlocking the smartphone transparent and instinctive. Well, no 3.5mm jack plug, but it has become a custom on smartphones these days.

If, as we have seen previously, Xiaomi has backed down by integrating an LCD panel rather than OLED on this Mi 10T Pro, the manufacturer has nevertheless equipped it with the same chip as its predecessor, the Snapdragon 865. Admittedly, this is not the “Plus” version of Qualcomm's latest high-end chip, but it is very much enough to support all the uses that we can have of a smartphone with extreme speed, the scroll on social networks to mobile games, even very greedy. Also, this chip gives the Xiaomi Mi 10T Pro compatibility with 5G, making the smartphone ready for the future. To accompany this SoC, we find 8 GB of LPDDR5 RAM as well as a UFS 3.1 storage system. All this, if we consider the speed of scrolling provided by the 144 Hz panel and the messy animations of MIUI 12, leads to an extremely pleasant experience, giving the feeling of having a real racing animal in the hands so much. navigation is fluid.

This is all the more relevant to have incorporated an ultra-fast SoC and a 144 Hz screen than MIUI 12, the latest version of the manufacturer's software overlay, itself offers a great feeling of fluidity. In its twelfth iteration, MIUI has seen the big picture and is getting a lot of features, in addition to a significant refresh of its interface. Thus, the place is made for animations of all kinds, with a rather spectacular side, but also to the arrival of a whole new dark mode, and new privacy protection settings, previously one of the black spots. of the brand. The interface itself reminded us a lot of iOS, with a special mention for the Control Center pane, located in the same place as Apple. Nevertheless, Xiaomi has polished up its interface really well, and despite the similarities to a certain Apple OS, MIUI 12 offers a clearly pleasant experience, with a mess of options to suit a very large majority of users. 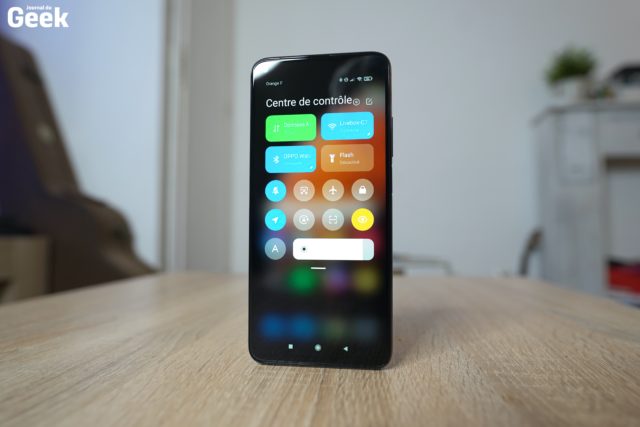 Finally, a word about battery life, which we found excellent during this short week of use. In our tests, we were able to go through the day without having to recharge the smartphone. Equipped with a 5,000 mAh battery, the Xiaomi Mi 10T Pro indeed seems better equipped than the Mi 10 Pro, which has a 4,500 mAh battery. However, the presence of an LCD panel – consuming more than OLED – as well as a refresh rate of 144 Hz qualifies this statement. Have no fear: the Xiaomi Mi 10T Pro is a rather autonomous smartphone, and if you ever run out of battery at a time when you are in a hurry, the smartphone is compatible with charging at 33W (compared to 50W for the Mi 10 Pro) , capable of filling its batteries from 0 to 100% in just one hour, and only 30 minutes to recover 65%! In addition, this time Xiaomi will include the compatible 33W charger unit directly in the box of the device. 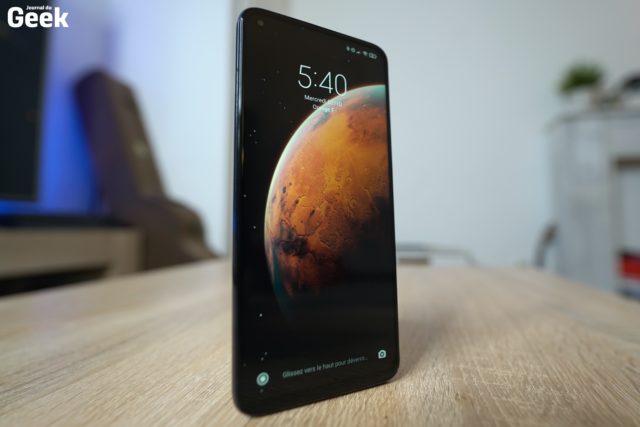 No big surprises or real evolutions in itself on the photo part, Xiaomi having mostly contented itself with ensuring that its Mi 10T Pro offers more or less the same photo (and video) performance as its Mi 10 Pro, halfway price. And the bet seems successful, even if we did not have a Mi 10 Pro on hand to compare in detail. The photos are extremely detailed thanks to the presence of this famous 108 MP sensor (whose images come out in 27 MP with the Pixel Binning), making the Mi 10T Pro the cheapest smartphone equipped with such a sensor. 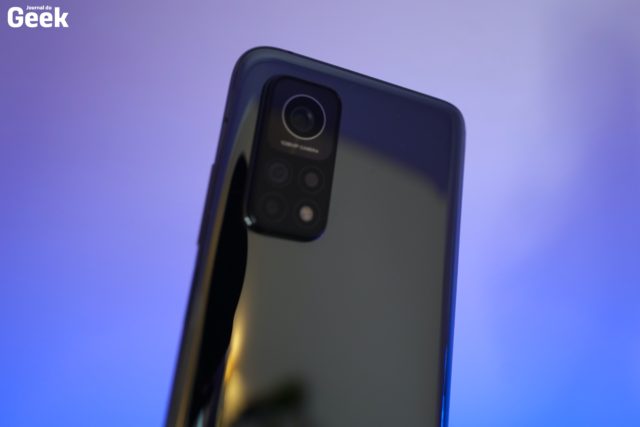 We found the results to be really very good, especially with this multi-purpose main sensor. The color saturation is pretty well managed (with a somewhat dull rendering but perfect for undertaking retouching later), it is very comfortable in low light and the excellent management of HDR really makes it a Swiss Army knife capable of get away with any situation. The 13 MP ultra-wide-angle sensor does well, but we still have more reservations about this 5 MP macro sensor, which we really found anecdotal. Clearly we would have preferred a telephoto lens over this macro, but, let's be honest, the main 108 MP sensor clearly offers everything you would need, including really decent (digital) zoom at least up to X5.

Finally, a word about the 20 MP front sensor which is neither more nor less than the same one already fitted to the Mi 10 Pro, and which is more than enough to capture quality selfies. On the video side, we note that the smartphone is capable of shooting in 8K at 30 frames per second, as well as in 4K at 30/60 frames per second. A Super Stablization mode eliminates the need for a gimbal, and the results were generally good, although below what an iPhone 11 or Galaxy S20 can offer in video.

The Xiaomi Mi 10T Pro is officially available from 569.90 euros on the Mi Store, but also at many resellers.