In a corner of the stable, Caroline strokes Utopia. The pony is tight against the teenage girl. Or the opposite. They are one body. A comforting, touching symbiosis. The relationship between the two was forged through equine mediation. This is an original and unique project in France: mediation with ponies for so-called "normal" children, that is to say, without pathologies or intellectual disabilities, simply in difficulty at some point in their lives .

It all started with a simple observation:

"Many of the children seen in consultation have cognitive investment difficulties, they have good potential but have learning difficulties. " 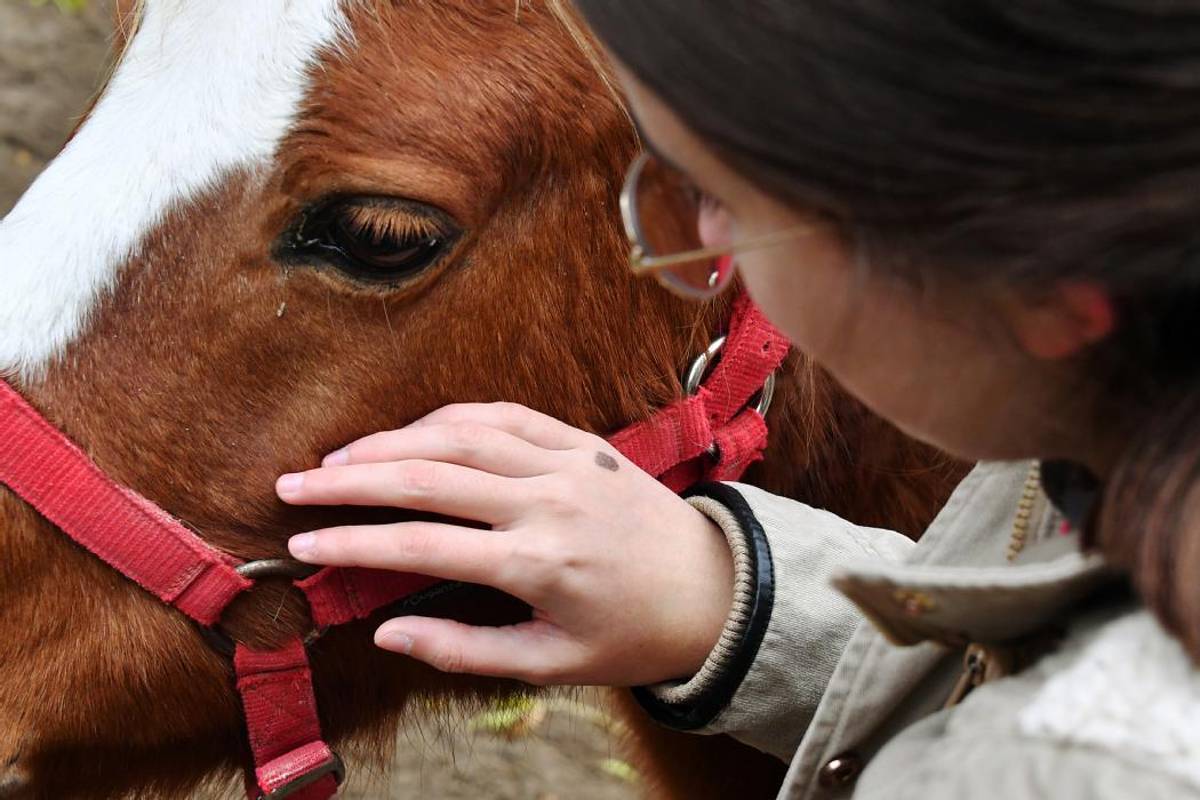 Whispering in the ear of the other …

The benefits of the horse for people with autism

Thanks to a regression work

With a scientific committee made up of a child psychiatrist, general practitioner, pediatrician and veterinarian, the team worked for three years on equine mediation based on regression work, drawing inspiration from the work of the British pediatrician and psychoanalyst Donald Winnicott. .

This scientific project, supported by the Allier Vichy community, was the subject of a publication and received a therapeutic tool label. 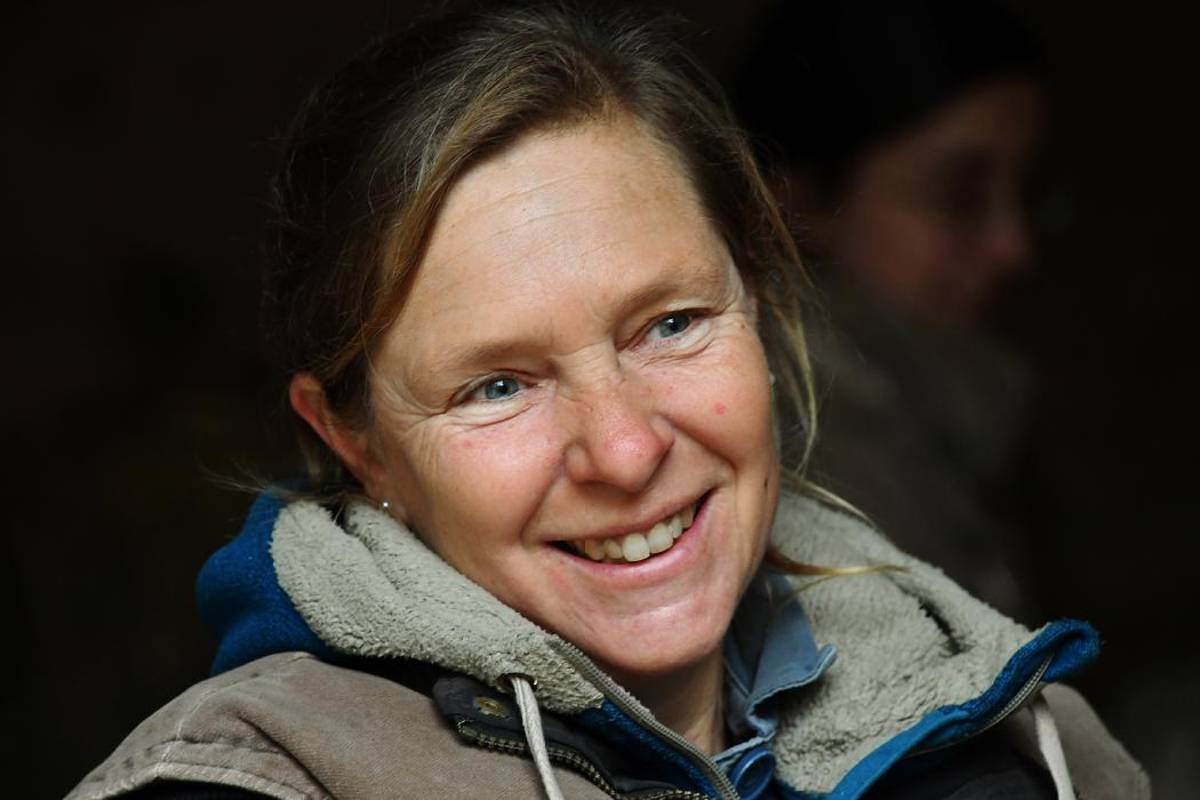 Regular sessions, with five children, are offered on certain weekends and school holidays in two equine centers: in Glaine-Montaigut for older children (supervised by Anne Lecoustre, riding instructor) and in Saint-Rémy-en-Rollat (Combine) for the little ones. 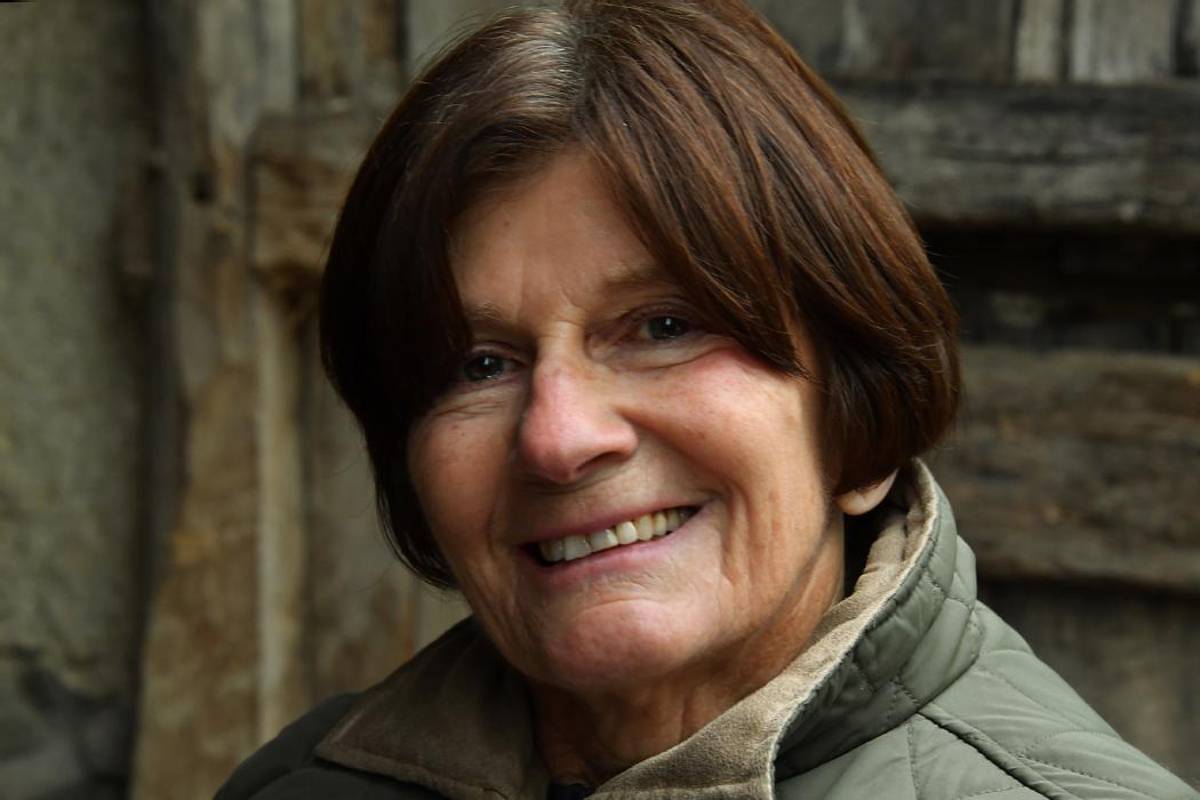 The pony is used as a regression tool. “In the first years of life, the mother-child relationship is formed. It is a question of returning, thanks to the animal, to this symbolic period. This does not mean that this relationship is problematic, we are simply proposing to return to this period in order to resolve a current problem, ”explains Blanche Decombas, the psychologist.

And the pony brings together all the qualities necessary for this therapeutic work, based on the notions of "holding, handling and transitional object" defined by Winnicott.

Holding: the mother is carrying the child. This bodily relationship generates an interaction and a feeling of security between the two. The pony can reproduce this relationship and can provide a feeling of security. This regressive work returns the child to the first stages of life. Concretely, the child becomes one with the pony, strokes it, smells it (its warmth, its smell), walks next to it, the pony carries the child …

Handling: this is the way to take, to handle the child. The pony enters this concept of handling, through grooming activities, food, water, brushing … This allows the child to become aware of the limits of his body.

Transitional object: it is the cuddly toy, this object which ensures the maintenance of the bond between the mother and the child. The pony is invested with the role of transitional object. The child assumes the rights to the object, intended for progressive abandonment. 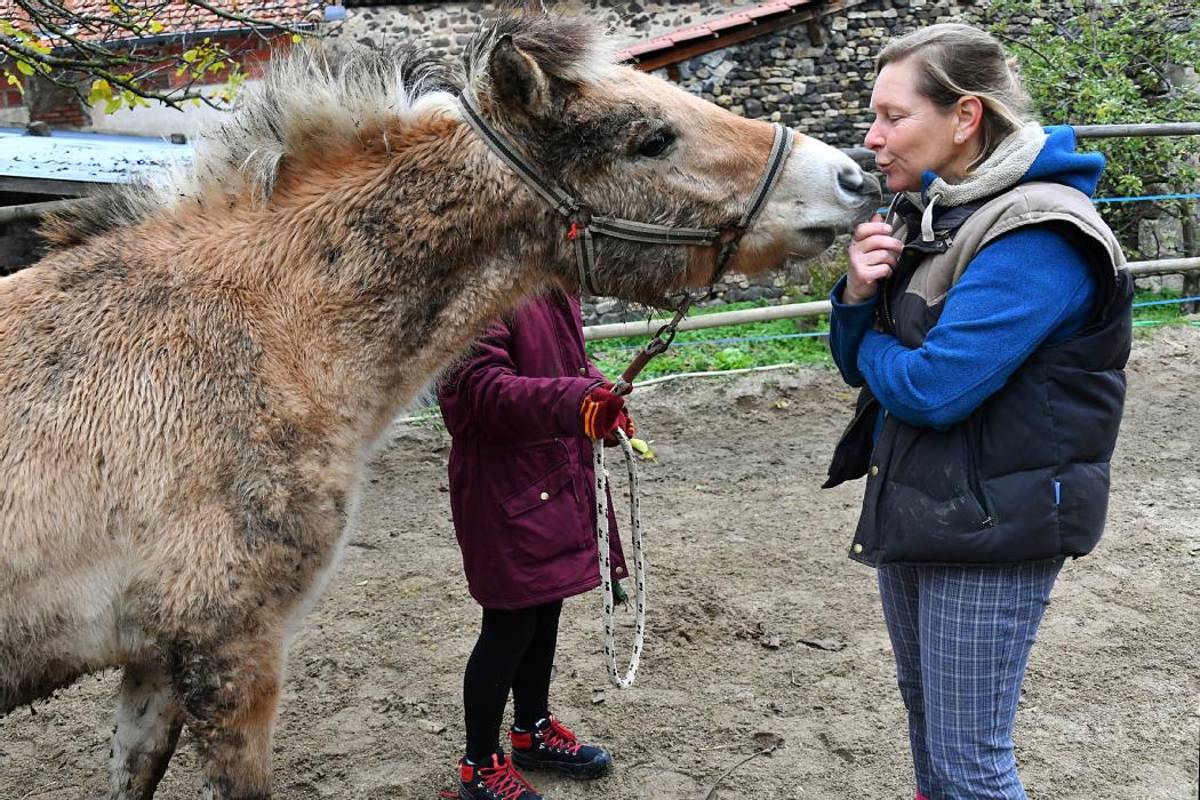 A mediation session supervised by Anne Lecoustre, educational instructor, and the psychologist.

On average, it takes two to three three-hour sessions to get results. It’s the child who decides when therapy should end.

"Ultimately, by holding, handling and the transitional object, the pony helps children regain their identity by restoring the body image. "

The psychologist performs between 300 and 400 mediations per year for around 42 children. In terms of effectiveness, Blanche Decombas also found that the child progressed much faster with this mediation than in office sessions. And that's without counting on gaining self-confidence.

It's the kids who say it

Baptiste, 9 years old: "When we arrive, we will see our pony. Mine's called Umi. I talk to him, I clean his eyes, I brush him, I stroke him, I cuddle him. I had problems with friends. I was insulted. I tried to adapt, but I couldn't. So I talked a lot to Umi and I regained self-confidence. Today, I decided to stop the equine mediation sessions because I feel good. There are still a few arguments, but I have no more problems. My parents say I grew up a lot. I said goodbye to Umi. "

Clement, 7 years old: "When we arrive, we will look for Poupounette in the meadow. I chat well with her, I stay in touch with her. When I brush it, I put my hand on it. We also put grease on his hooves. She really likes. I make him happy. And I have fun giving him food. I tell him what I do and I tell him my problem. Now it's over. My problem is gone. I feel much better. " 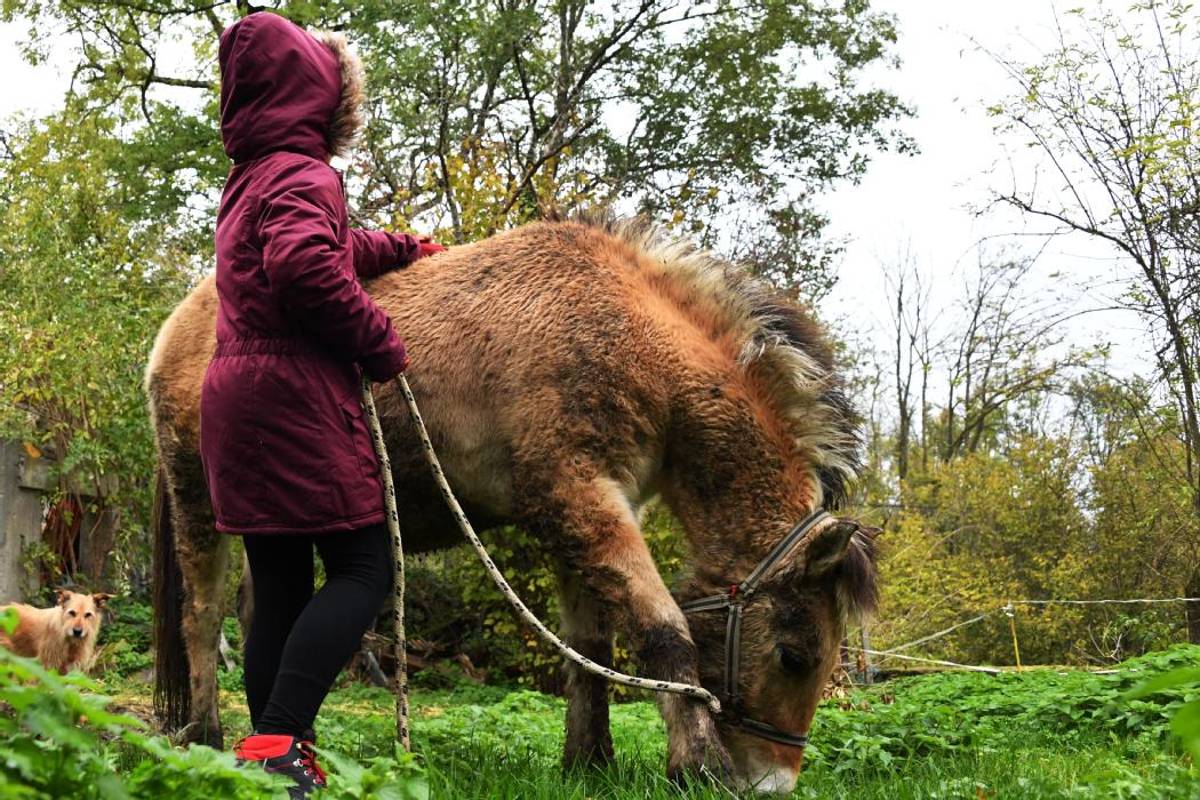 Animal mediation with ponies in Glaine-Montaigut.

Louise, 10: "When I first arrived, it was also the first day of Escule. When I talk to her, I feel like she understands me. She shows it to me. I tell him about my problem. And just caressing it makes me feel good. Sometimes I brush it, I see it feels good too. "

"When she feels good, I feel good too. When we go to shower, she takes the pipe in her mouth, she makes me laugh! Contact is what I miss, and she gives me that contact. I filled part of the void with her. "

"At school, in CM1, I felt bad about myself because I had suffered several upheavals. Today, they no longer have a big place in my life. I remember but I put them aside. "

"When I come back from mediation, I am quiet for several days, because I spoke, I emptied my bag. I even manage to feel good for several weeks at a time, so I don't need a new session. "

Clarisse 11 years old: "My pony is called Umi. I caress it, brush it, I talk to it. He doesn't speak to me, but he can hear me. I feel it, he understands me. He reacts when I tell him about my problems at school. I am much less nervous, less stressed. I have more friends and I annoy them less. I feel better and I manage to work better at school. " 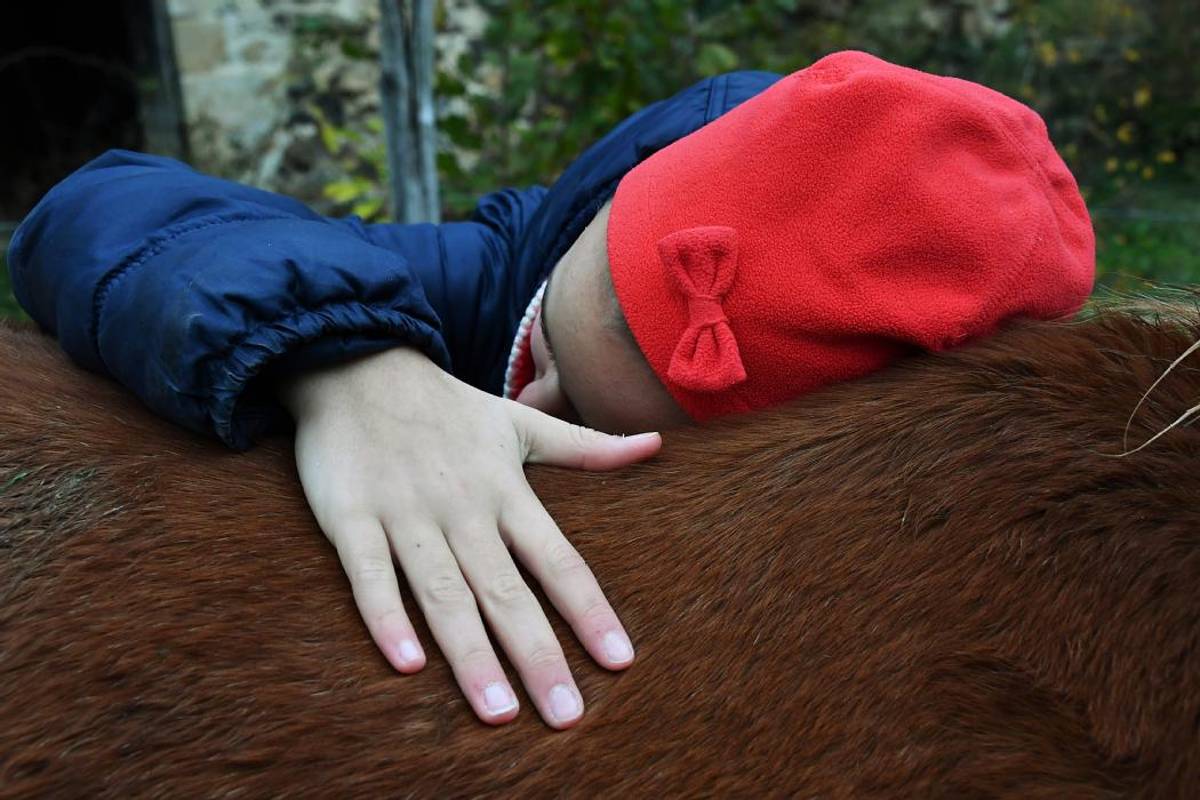 Caroline, 14: "I started mediation a year ago. Before that, I felt very bad. I completely fell back on myself. I was scarifying myself. I was hiding behind my hair. I stayed two years without going to school. I was too anxious to go to college. I was afraid of others. I completely lacked self-confidence. In elementary school, I was harassed. Long time. A boy was tying me up with a skipping rope and walking around the yard. I dared not say anything. To no one. I was demeaned. I no longer spoke. I was hiding. I missed two school years, and I had to be hospitalized for a month. I was taking a lot of treatments that fell asleep all day. "

"Today, thanks to Utopia, my pony, thanks to mediation, I can go back to school. I will pass my patent. I feel lighter. I manage to feel the joy of living. I hardly take any more treatments. I said all my sadness to Utopia. All my emotion. I really like animals, and I feel that Utopia has confidence in me. One day she lay down against me and fell asleep at my feet. I'm less afraid. Utopia lifted me up. She saved me. "

Delphine, mother of Clément and Clarisse: "When I pick up the children after an equine mediation session, I see that it does them a lot of good! They were able to say what they wanted to say, what they don't tell me. Both have gained confidence. They acquired the small missing piece in the cogs. This gain in confidence allowed them to solve the problems. When I come to pick up my daughter, I see that it was rich in emotions. Tears flow but it's positive, something comes out, escapes. There was excess in our relationship, this was resolved with mediation. My son grew up, he gained strength and he is much more independent. "

Caroline's mom Evelyne: “My daughter had a depression. She was scarifying herself and had very dark ideas. She suffered from school and social phobias. She was hiding behind her hair. We didn't understand. We tried everything. Hospitalization, heavy treatment did not change anything. We went from psychiatrists to psychotherapists … Nothing helped. She was no better. A friend then told me about equine mediation. We decided to try. "

"The first session was not easy because it was in a group, and even in small numbers, it was complicated. She went there the ball in the belly. Fear of the eyes of others. However, from the second session, she wanted to go back. She managed to build a relationship with the pony. A liberation ! Getting to take care of a big animal like that, gaining his trust … it gave him back self-confidence. We were able to stop all treatments except one small one. Mediation saved me! " 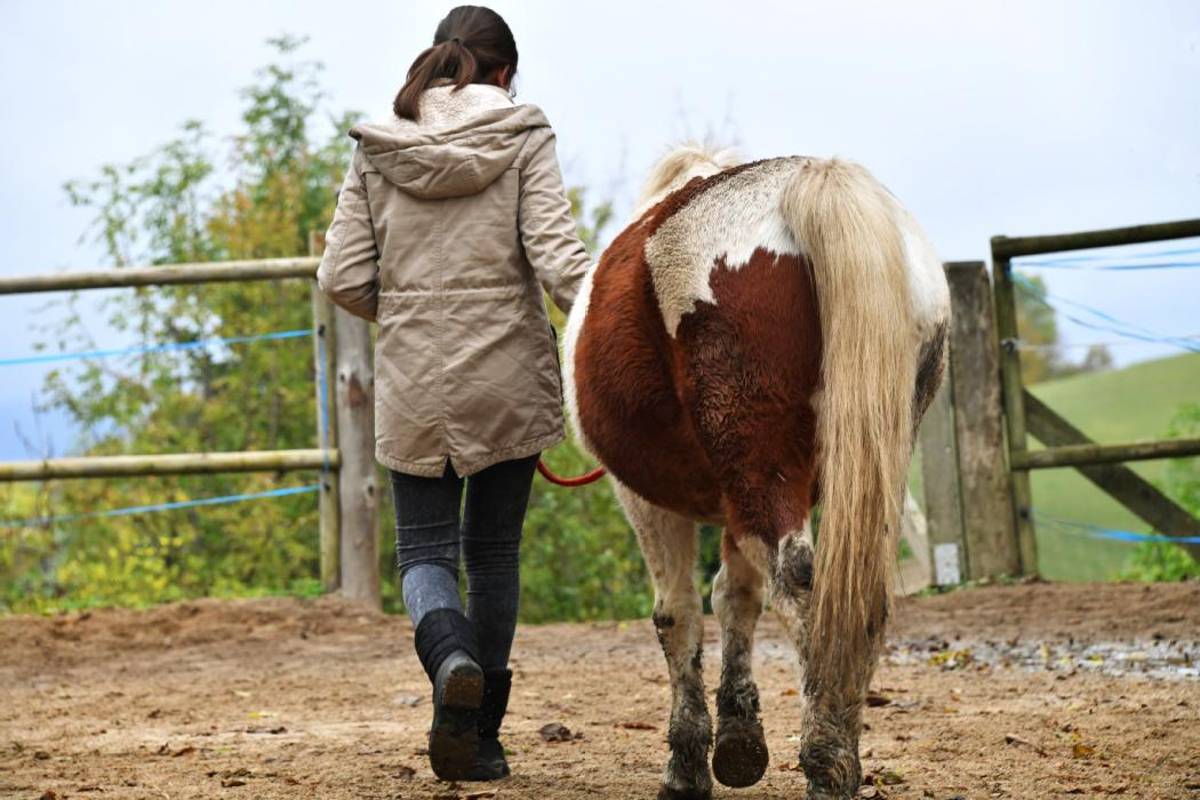