What is an Aurora Borealis?

An aurora borealis, also called the polar aurora in the northern hemisphere, is a luminous phenomenon composed mainly of green glows in the clear sky. The charged particles of the solar wind are attracted to the poles and collide with atoms and molecules in the upper layer of the atmosphere. This fabulous spectacle takes place at an altitude of 100 kilometers. They are observed on earth, but they are also visible from space. In Norse mythology, these lights represented the reflection of the armor of the Valkyries. These warrior virgins on horseback and servants of the God Odin escorted the souls of the heroes who died in battle to Valhalla. For the Vikings, they were the reflection of the ghosts of virgins. The indigenous Sami people heard them and the Inuit thought that the Northern Lights represented the dance of the dead. Between myths and legends, the Northern Lights are still fascinating. 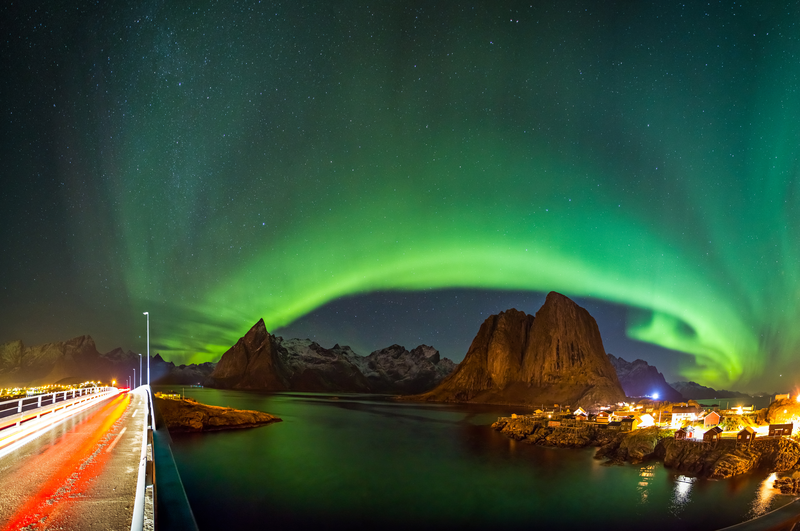 Where to watch the Northern Lights in Norway?

Who does not dream of one day seeing these magnificent colors dance in the arctic sky? The magic of this phenomenon does not happen in many places around the world. To live this experience, your best chances are in northern Canada, Greenland, northern Russia, Alaska, Iceland and northern Scandinavia, especially in Northern Norway! It is possible to see them in southern Norway, but it is not the best place for the Northern Lights. Let's take a look at the best spots to see the Northern Lights in Northern Norway!

– Tromsø, the gateway to the Arctic

Also nicknamed “the Paris of the North”, Tromsø is the starting point for polar expeditions. It is also the only city where it is possible to see the Northern Lights. Get away from the city lights a bit, less illuminated streets offer you a magnificent spectacle. Lake Prestvannet, just 20 minutes from the center of Tromsø, also offers a clear view to enjoy the dancing lights. 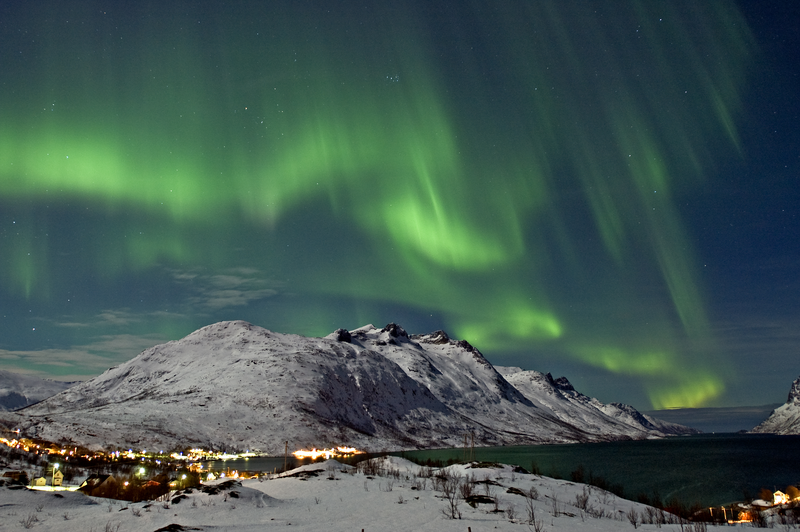 – The Lofoten, landscapes straight out of fairy tales

The Lofoten Archipelago and its many fishing villages are ideally located for viewing the Northern Lights. Lofotens welcome many tourists in summer, but the archipelago shines brightly in winter. It’s a real treat for the eyes. With its red fishing huts, snow-capped mountains and the northern lights reflected in the waters of the fjord, you have arrived in wonderland! 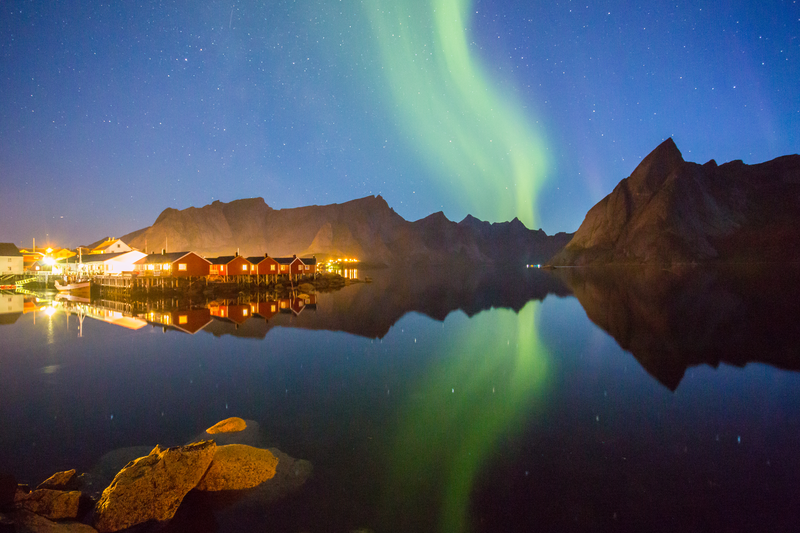 Less well known than the Lofoten Islands, Senja remains a pure wonder. This island paradise with its white sandy beaches and steep mountains is located north of Lofoten and south of Tromsø. Senja is full of many Instagrammable spots to go hunting for the Northern Lights. Close your eyes and feel the calm away from all the hustle and bustle of the cities. Lift your head and let yourself be rocked to the rhythm of the Northern Lights dance! Enjoy this magical moment on this magical island … 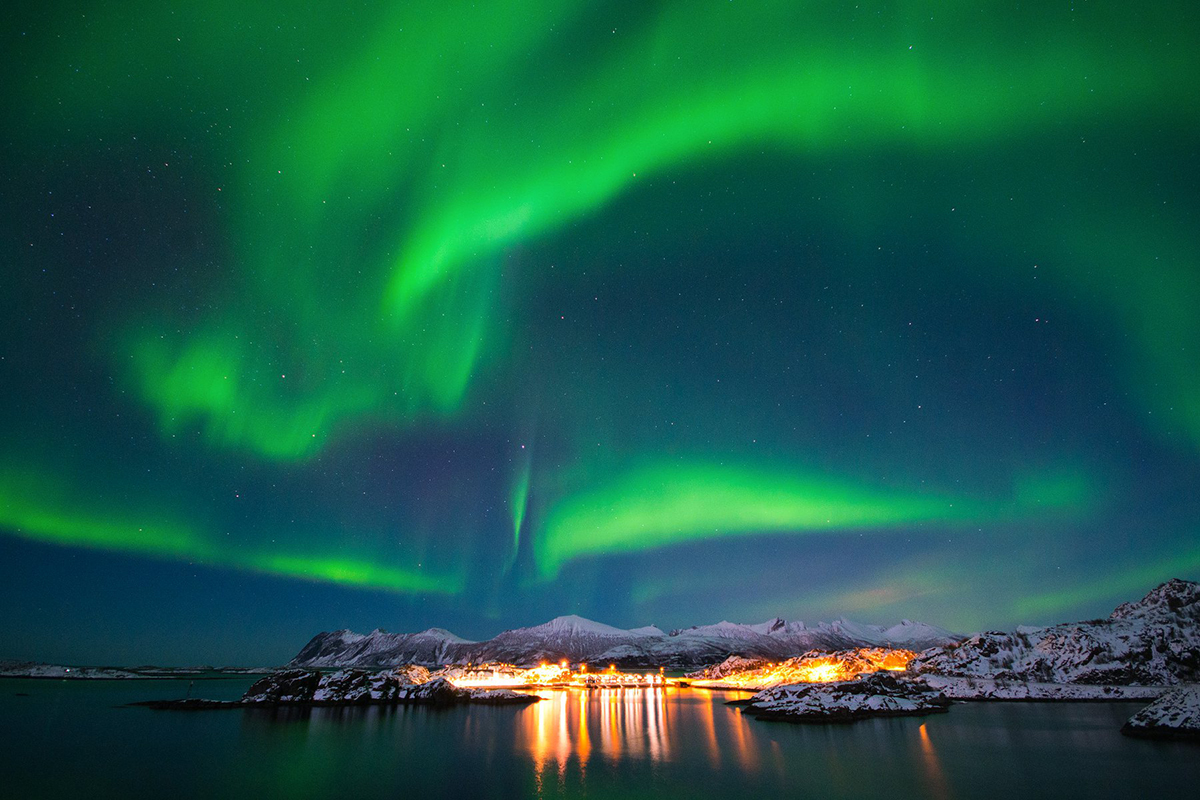 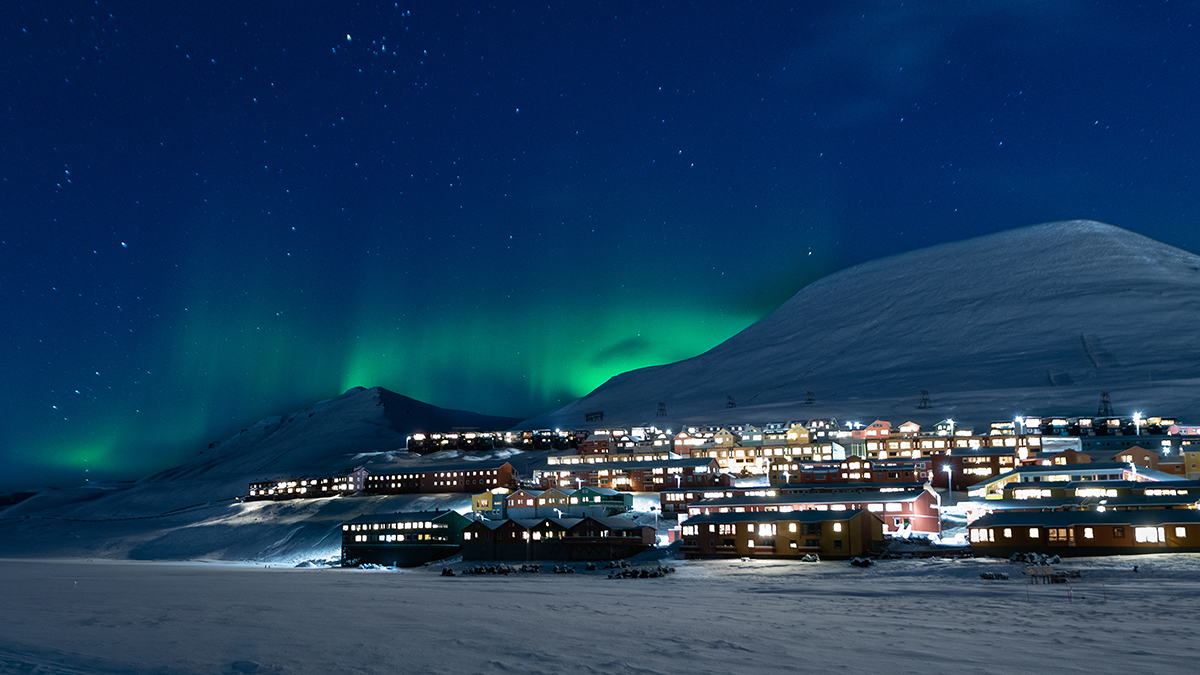 When to see the Northern Lights?

The Northern Lights season runs from mid-September to mid-March depending on where you are in Norway. You can only see them when it is dark and the sky is completely clear. If you see stars then you have every chance of seeing a wonderful spectacle. This natural phenomenon is not available on request, you will have to be patient! And yes, the aurora borealis can also shine by its absence! To give yourself the best possible chance to observe them, plan several days there and download the Norway Lights app! It alerts you to the best times to see the Northern Lights. You can call on specialized companies to experience a northern lights hunt. Final advice: dress warmly, look up and be patient! Seeing the Northern Lights is worth it! 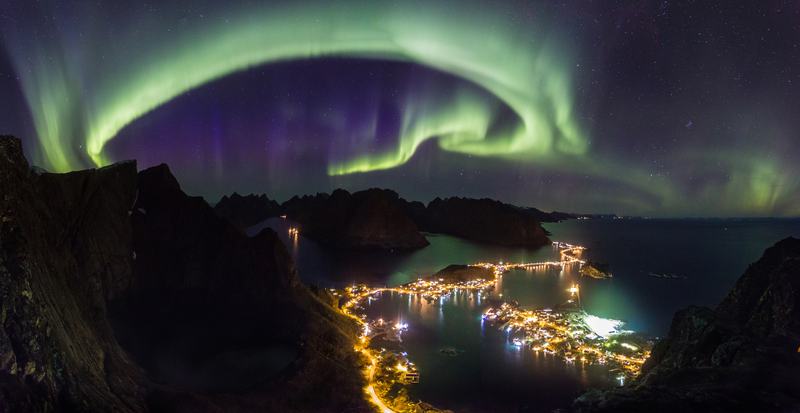 What advice for photographing the Northern Lights?

Watching an Aurora Borealis is one thing, photographing it takes a little preparation. Whether you use your smartphone or your camera, it is above all necessary to master its operation. Watching the Aurora Borealis arrive that you should not worry about, it will be too late! But, don't panic, a few tips should be enough to immortalize this unique moment. 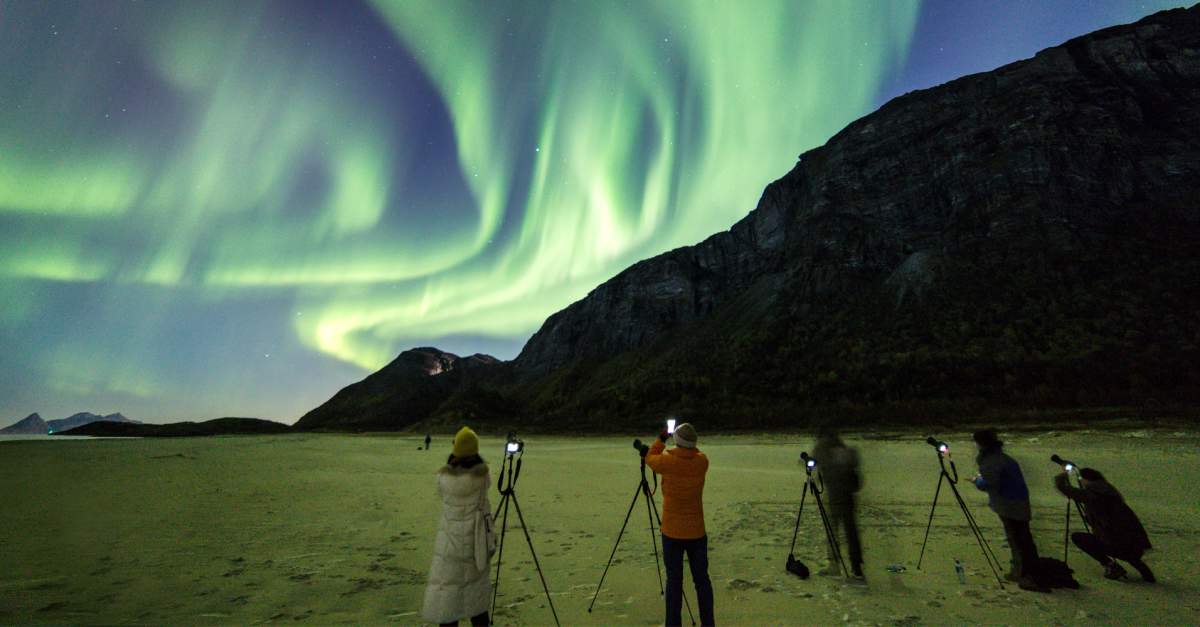 – Stay away from city lights

Although the city of Tromsø is an exception, it is generally better to stay away from the light pollution of cities. Dive into the dark and enjoy the light show!

– Use your camera or smartphone well

Whether you're shooting the Northern Lights with your camera or smartphone, you need to use a tripod and a self-timer for good stabilization. Your camera must be set to take photos without flash. You need to focus manually and the ISO sensitivity should be between 800 and 3200. As the Northern Lights appear at night, the sensor is more sensitive to pick up light, so you need to increase the ISOs. Allow a minimum exposure time of 2 seconds.

– Remember to consult the weather forecast

Imagine yourself comfortably seated in a SPA on the island of Senja sipping a cold drink (yes, that's a real experience!) And the rain is coming out! What a desappointment ! To avoid this inconvenience, consider consulting the weather forecast in Norway. Indeed, to see the Northern Lights, it is better for the weather to be clear. You can download YR's weather app. The data is quite reliable there. For the less adventurous, contact a local guide to book an Aurore Boréale outing. Even if the weather forecast is not promising, don’t give up… An unexpected solar storm could surprise you!