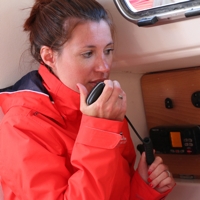 While he was successful at the cost of many efforts to stabilize the keel of IMOCA Hugo Boss, Alex Thomson and Neal Mc Donald finally made the decision to part with it. After a little rest, the two skippers realized that keeping the IMOCA keel endangered the integrity of the boat. Only restrained by its hydraulic cylinder and very unstable, it could damage the hull strongly.

With the help of their technical team ashore, and after several hours of effort, Alex Thomson and Neal McDonald finally managed to drop the keel of Hugo Boss. To try to keep the 60-foot monohull as straight as possible and to stabilize it, both navigators filled the ballasts and deployed the foils. Fortunately, they sail in a calm sea with a light wind and the conditions present for the moment no danger for the men as for the boat.

After several options studied – the first was to join the Canaries – the shore team in agreement with the sailors decided that the safest solution for the skippers was to go to Cape Verde, about 800 miles from the position current Hugo Boss.

Hugo Boss in black up shifted in the west

The boat is currently advancing at 7 knots maximum in an evanescent wind. They will continue to sail with the greatest caution to Cape Verde, a navigation that under current conditions should last about 5 days.

The two skippers are in regular contact with the shore team, which is about to rejoin the boat to allow it to reach the port safely.