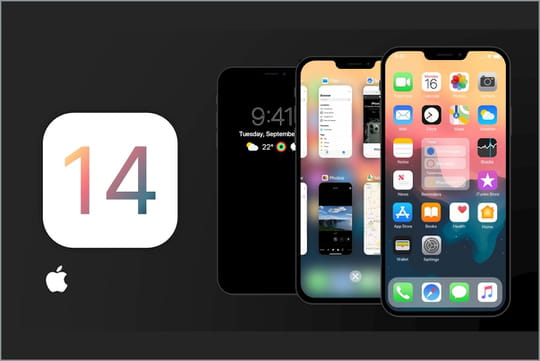 (iOS 13, iOS 14) The test copy of iOS 14 recovered by the American site 91mobiles is said to come from an iPhone 11 illegally sold in China.

(Updated Monday 25 May 2020 at 3:45 p.m.) Since last February, 91mobiles has unveiled a number of new things supposed to be introduced with iOS 14. The new version of the mobile system must be presented by Apple in preview on June 22nd during WWDC 2020. We now know a little more about the supposed origin of this copy. According to Motherboard, it comes from an iPhone 11 development acquired in China by an enthusiast for several thousand dollars. Dating from December 2019, the version of iOS 14 integrated into the device would then have been released by the latter via the internet.

Unofficial information is multiplying on what could reserve iOS 14 which, let us recall, will equip the next models of iPhone. Code name: Azul. Supporting video, 91mobiles claims to have recovered in February 2020 a preview of iOS 14. It reveals several possible new features:

Faced with the multiple bugs encountered in iOS 12 and iOS 13, Apple would have decided to review during the development of iOS 14 its beta-test processes. According to Bloomberg, the group could deactivate by default the unfinished or buggy features in the preview versions of future iOS 14 updates. The beta testers should nevertheless be able to selectively activate these functions via "a new process internal and a new settings menu, called Flags, allowing them to isolate the impact of each. " As part of this quality approach, Apple would even study the possibility of postponing certain functionalities initially planned for iOS 14 with a view to integrating them into iOS 15, which should be released in 2021. Objective for the group: give themselves more time to optimize mobile system performance. If we follow this reasoning, some of the features present in the test version of iOS 14 recovered by 91mobiles may not be integrated into the final version of the new opus. Third-party sources also mention other potential developments:

As with each launch of a new version of iOS, graphic designers began to imagine what could give the future version via conceptual videos. One of them imagines the extension of the Split View function, already present on iPadOS, to iOS. This would allow two applications to run on the iPhone screen in parallel, for example a video player and a note taking application. Another graphic designer anticipates the possibility of opening apps by dragging and dropping or of choosing more freely where to place the icons on the home screen. As for the youtubeur Brandon Le Proktor, he is considering the possibility of automatically routing a Facebook, Instagram, Twitter (etc.) link to the corresponding native application or even to display notifications directly in the applications icon. Created by a Frenchman, one of the latest conceptual videos to date highlights still other possibilities in images: always-in display, widget … (see the video below).

Each year, Apple releases a new major version of iOS. 2020 will not escape the rule. iOS 14 should be presented in preview at WWDC 2020. The company's conference for developers will take place on June 22. Apple has announced that it will be organized online due to the health situation linked to the Covid-19 epidemic, and that presentations will be dedicated to the future of iOS and iPadOS for the occasion. As for the release date of iOS 14, it should intervene like the previous versions of the mobile system during September 2020.

Evoking an internal source at Apple, the iphonesoft site lifts the veil on the list of iPhone and iPad that should support the future iOS 14. Unlike iOS 12 whose hardware backward compatibility was limited, iOS 14 could support the all iPhone and iPad compatible with iOS 13. But the list would not be final. Apple would indeed question the relevance of integrating the iPhone 6S and iPhone SE, models both equipped with the A9 chip. The latest entry-level devices from the Apple group such as the iPad 7 or the iPod Touch 7 being equipped with the A10 chip, this represents "only a generation of deviation", iphonesoft analysis.

iOS 13.3 was released by Apple in final version in mid-December after four beta versions (see details on the Apple website). The update improves the Communication Limits parental control console, and in particular its Screen Time function. In previous versions of the OS, it already made it possible to define consumption time limits per application, content restriction rules and lists of authorized applications. iOS 13.3 introduces the possibility of authorizing or not of contacts with which to communicate. Another functional development: support for FIDO2 authentication keys in Safari.

There is also a notable ergonomic change concerning iPadOS 13.3. The update incorporates the concept of active corners from Mac OS. A concept that allows you to execute the actions of your choice, for example opening an application, by positioning your finger on one of the corners of the Apple tablet. To associate an action with a corner, go to Settings> Accessibility> Touch> Assistive Touch> then activate Waiting control> and, finally, open Active corners.

Delivered at the end of May, the iOS 13.5 update introduces the tracking and notification system in the event of risk of exposure to Covid-19 that Apple has co-developed with Google (see the tweet below). It is backed by an API (API Exposure Notification) designed to make Android and iOS devices compatible with the control applications of health authorities, which will be the only ones able to use the device. Apple and Google provide their APIs in 22 countries. France is not one of them. It did not wish to benefit from it for its StopCovid application. Another evolution launched with iOS 13.5, the Face ID identification mechanism by face recognition now detects the wearing of a mask and automatically activates the unlocking function by access code. Finally, during an emergency call, the user's medical file can be automatically transmitted to the correspondent.

Apple and Google have published their rules of conduct for publishers wishing to take advantage of their APIs to develop contract tracing applications. They are very strict. APIs can only be used by public health authorities to respond exclusively to the challenges of Covid-19. They cannot be used for advertising purposes or to collect location data. Their deployment obviously implies the agreement of the user. Finally, the two groups will only allow one application per country. The Exposure Notification API is based on the Bluetooth Low Energy only protocol to collect data.

The operating system dedicated to the iPad is now uncorrelated from iOS and is the subject of a separate OS, called iPadOS. For the occasion, Apple is introducing several salient new features in addition to those delivered with iOS 13: