The Chinese manufacturer today presented the latest addition to the MateBook family, with a D16 model equipped with the AMD Ryzen 4000 H-Series processor.

Under the hood, the terminal also has a processor AMD Ryzen 4000 H-Series engraved in 7 nm, as well as several new features intended to improve the user experience. Despite its compact size, the laptop carries with it a Radeon graphics card capable of supporting the most resource-intensive multimedia content, even when multitasking. The MateBook D16 also has two USB-C ports, two USB-A 3.2 ports, one HDMI port, a fingerprint reader located under the power button, as well as a 3.5mm jack. Thanks to its support for Wi-Fi 6, the computer allows a stable connection on a daily basis, both nomadic and sedentary. With 65W fast charging in USB-C, the latter can also gain 2 hours of battery life in just 15 minutes. Compatible with the brand’s other terminals equipped with Huawei SuperCharge technology, the MateBook D16 also allows reverse charging when it is off. Finally, the pop-up camera with mechanical shutter makes it possible to protect the privacy of its users, while guaranteeing a perfectly borderless screen.

Marketed from April 27, the Huawei MateBook D16 laptop in 16 + 512 GB configuration will be offered at a price of € 899.99. In the meantime, it is still possible to fall back on an earlier model, such as the MateBook D15 or the MateBook D14. 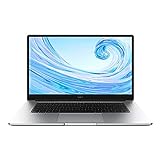 the Android TV application seems (finally) to be approaching