A psychiatrist, psychoanalyst, social psychologist and teacher of generations of colleagues, Hernn Kesselman developed his professional and academic activities in Argentina and in other countries, particularly in Spain.

Two years have passed since his departure and I try in this writing to make him present by linking some details of his human and professional dimension, both closely linked. Few people know that Hernn was a musician, and that his absolute hearing allows him not only to hear the words of patients and students, but also their “music”, which is important in his professional work.

Also, as had studied painting in the workshop of the teacher Emilio Pettoruti, his gaze had been enriched by observing the bodies and their expressions. His professional life is better known.

Psychiatrist, psychoanalyst, social psychologist, a reference in Mental Health and teacher of generations of professionals from very varied currents of the group and other areas of psychotherapies. He developed his professional and academic activities in Argentina and in other countries, particularly in Spain where we were exiled for a decade.

Goldenberg was a guide to many young psychiatrists and psychologists, social workers, and more professionals who participated in that experience. A homeland. Goldemberg was godfather to our wedding and almost a father to Hernn.

In the mid-1960s, the WHO Pan American Health Office invited Hernn to participate in an educational program in Mexico. It was about teaching and practicing in the dynamics of the groups to medical professors from various universities.

Through his first book “Brief Psychotherapy”, he became a pioneer in Argentina about the topic. Of him there are some transcriptions in his two volumes of “Operative Psychotherapy”, books that are a compendium of his life and his work.

In the 1970s, he was Professor of Medical Psychology at the Buenos Aires School of Medicine and Head of the Service corresponding to that chair at the Hospital de Clnicas. For the first time in Medicine, Hernn instituted “group final exams” and in the Service of the Hospital de Clnicas created the “waiting groups” of patients in transit, coordinated by psychologists and psychiatrists.

At the beginning of our exile in Spain, in 1976, group currents in psychology, which had been restricted in Franco’s time, were awakening. Hernn was very well received by Spanish psychiatrists and psychologists, especially by Dr. Nicols Caparrs and his group Quip.

I founded in Madrid the first School with the ideas of Pichon-Rivire and I was in charge of looking for the classes that the Argentine School of Social Psychology sent us through the Spanish comedian Gila. The School continued to train social psychologists even after our return to Argentina.

Hernn deployed his works on group psychology in several Spanish cities: a Master in San Sebastian, at the University of Salamanca, in Zaragoza, Seville, Palma de Mallorca and especially in Barcelona where together with the psychiatrist Juan Campos, he traveled the paths of “group analysis”. I only mention some landmarks of that welcoming Spain that received so many exiles. Hernn also spread his ideas in European cities: in Paris – invited by Pino Solanas – in London, in Gothenburg, in the School of Social Psychology in Tel Aviv and Jerusalem and in other places that I am surely forgetting. 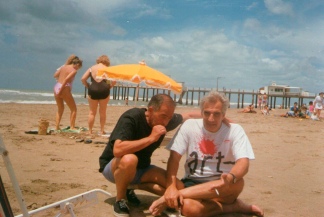 Hernn’s ideas shared with Eduardo “Tato” Pavlovsky and Luis Frydlewsky were reflected in the book “The Feared Scenes of the group coordinators”. Thus arises a method that is still very widespread. The question they asked themselves was: Why don’t therapists and group coordinators talk about their own conflicts on the job? This work was the milestone between the end of our life in Argentina and the beginning of life in Spain.

Later, after Frydlewsky passed away, the displays that Tato and Hernn called Dramatic Multiplication emerged. “Multiply instead of reduce.” The proposal was difficult and had to be practiced a lot.I found a phrase from Hernn on this concept: “Multiplying is not just cheerfully proposing free dramatic associations, nor is it pre-fabricating a witty or funny plot. This is not a polite parlor game. Multiplying is learning to play with the risk of not being able to stand up and fall from one’s own ego “.

A part of the experience in Seville. That is where he had the happy meeting with the flamenco singer Juan Pea, el Lebrijano, who made him participate in the “La noche de los brujos”, a magical night that Hernn tells in the book he wrote with Tato: “Espacios y Creatividad “. These encounters in Seville were sponsored by the psychologist Luis Garca Caviedes who wrote about the “dreaded scenes” of bullfighters.

My memories take me back to prehistory. I met Hernn when they were both very young, in 1961. He was already a recognized psychiatrist despite his youth. In addition to working in the Lans, he had been appointed that year Secretary General of the International Congress of Depressive States in Argentina. In the early 1970s, Hernn was already Head of Teaching at the Lans and shortly afterwards he directed the first Residences in Psychiatry, a hotbed of outstanding professionals. I participated, along with other colleagues, in the interdisciplinary team that accompanied him in this task.

With a smile I remember the times of the Argentine Psychoanalytic Association (APA) in which I was a student 10 – a sort of return to Nacional Buenos Aires – although, already received, he was one of the promoters of a dissident Movement: Platform.

This group, accompanied by the Document group, left APA. The dissidents were, among others, Tato Pavlovsky, Emilio Rodrigu, Marie Langer, Fernando Ulloa and several other psychoanalysts. The testimonies of this movement appeared in the book “We Question” where articles of political and ideological importance were published in the field of Mental Health that justified dissent with an International Association of Psychoanalysis which they considered the expression of an elitist institution. They were political times of great effervescence, of the pride of belonging to the Third World.

In the fruitful meeting with Eduardo “Tato” Pavlovskv, there were several exchanges that are reflected in the books they wrote together. They were a very fun and creative couple. They were named Psychoargonauts and share the name with the psychoanalysts Emilio Rodrigu and Fernando Ulloa.

In 2015 the City Legislature through the now Senator Jorge Taiana declared it “Outstanding Personality of Medical Sciences”.

There were several tributes to Hernn when he died, on behalf of Institutions and professional groups. Students of the training groups -Covisin- continue to meet, I am part of them, in the persistence of the Kesselmanian developments in the field of Mental Health. His children Martín and Mariana, have inherited not only a surname but love and creativity in a work that always continues in new directions. His daughter Lucila, documentary editor, colourist and other arts around the cinema, he inherited that finesse, his eyes to see the invisible in his own art.

His last work were the two volumes of Operative Psychotherapy where Hernn collects well-known works and texts scattered in magazines. His work shows that political thought was a common thread in his life. In 1969 he published one of his most committed and still discussed articles: “The social responsibility of the psychotherapist.”

A few days after his death, a colleague who was doing research on the 70s told us that he found, in the General Archive of the Nation, two letters Hernn had written to Pern When I brought him a gift from fellow Peronists from the southern zone and since he did not find it, the General wrote him a letter with a long greeting.

Hernn left this world unaware of this find.

The latest travel tips from the UK Foreign Office for France, Spain, Italy and Portugal

Are you a dirty old man? What Virgilio said and what is said today

Psychologist and psychotherapist: what’s the difference?

Ghosting: what it is, the causes and the consequences – Minutouno.com

“We are no longer in psychology, we must move forward, that’s all”