(BFM Bourse) – Yoyo, saloon door, scissors, roller coasters, it is according to … The images are not lacking to illustrate the nervousness which alternates, since the beginning of the week in Paris in any case, the scarlet red and apple green sessions. Yesterday the Parisian index managed to gain 0.93% by passing 5500 points (5510 points) after a very volatile session.

Market psychology is becoming tormented as new restrictive measures take shape, to cope with the progression of a Civid-19 pandemic whose operators realize that the vaccine will not stop it with a snap of the fingers.

This morning the atmosphere should remain fresh, with the publication by INSEE of a drop of 8.3% of GDP over the year, a historic recession, the strongest since 1945, over a year 2020 marked by two episodes of confinement. The decline in GDP in Q4 alone (-1.3%) is however much more moderate than suggested by median expectations.

Yesterday in terms of US figures, US growth in the 4th quarter of 2020 in very first estimates missed expectations (+ 4.0% instead of + 4.2%) compared to the previous quarter. On the other hand, weekly registrations for unemployment benefits (847K), the goods trade balance, which saw its deficit decrease, and wholesalers’ inventories, beat their respective targets.

Side values, STMicroelectronics shone (+ 4.13% to 33.03 euros) after reporting results and especially forecasts above analysts’ expectations. In the first quarter, the semiconductor maker notably anticipates sales of $ 2.93 billion, up 31.2%, with a gross margin of 38.5%, where the consensus was instead on 2.6 billion. ArcelorMittal did even better, gaining 5.1% without any particular news (the steelmaker does not publish before February 11).

In contrast, Unibail, which had soared by almost 20% on Wednesday on the assumption that the action, strongly targeted by short sellers with the real estate sector, could benefit from the enthusiasm of investors for own account in the lineage of what we saw on GameStop, lost 1.5%.

Again against the backdrop of publications, Elior’s accounts were sanctioned by -10.6%. The collective catering group has unveiled a turnover down 28% in the past quarter, to 945 million euros, even lower than expected.

An update on other risky asset classes: around 8 a.m. this morning on the foreign exchange market, the single currency is trading at a level close to 1.2100$. The barrel of WTI, a barometer of risk appetite in financial markets, was trading around 52.20$.

On the statistical agenda this Friday, to be followed as a priority across the Atlantic, consumer spending and income at 2:30 p.m., the Chicago PMI index at 3:45 p.m., current home sales at 4:00 p.m., as well as revised “UMich” data for inflation and consumer confidence, at 4:00 p.m.

We made it clear on Wednesday that under 5,490 points, however, a dangerous area was identified. This zone is opening up, and the increase in volumes on Wednesday came to be confirmed as was the pullback from Thursday. However, the absence at this stage of a sectoral federation should be noted: it militates for early support, thereafter, on an intermediate guardrail towards 5,300 points. This appointment should occur in the immediate vicinity of the 100-day moving average (in orange). Negative opinion on the scale of the coming session.

In view of the key graphic factors that we have mentioned, our opinion is negative on the CAC 40 index in the short term.

This bearish scenario is valid as long as the CAC 40 index is quoting below resistance at 5730.00 points. 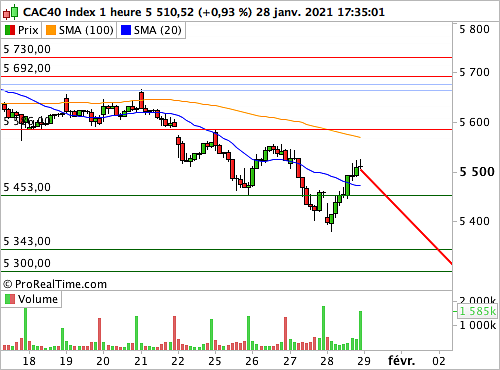 Graphics made from software Prorealtime

Graphics made from software Prorealtime