AnTuTu has just put online the ranking of the most powerful Android smartphones for the month of March 2021. This month, the ROG Phone 5, the latest gaming smartphone from Asus, takes first place in the top high-end phones. On the mid-range, we find the Huawei Nova 7 in first place. 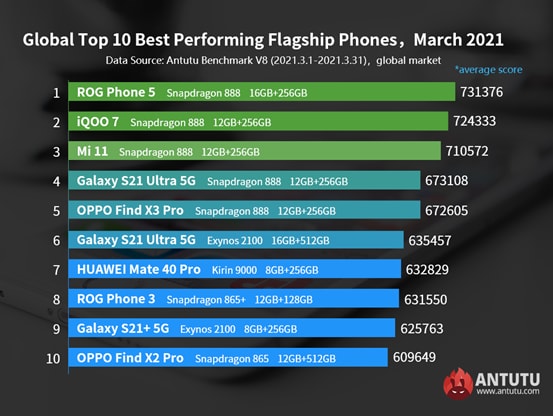 This April 8, 2021, AnTuTu published the rankings dedicated to Android smartphones on its official website. In first place in the ranking reserved for high-end devices, we find the Asus ROG Phone 5. Thanks to its Snapdragon 888 coupled to an impressive 18 GB of RAM (a first), the smartphone for gamers obtained a score of 731,376 points.

During the official announcement, Asus claimed that the ROG Phone 5 is capable of climbing up to 742776 points on AnTuTu. This performance is notably due to the presence of a fan capable of keeping the components cool during the most intense phases of play.

On the same topic: AnTuTu bans Realme GT for cheating in benchmarks

In second place, we find the Vivo IQOO 7 with SoC Snapdragon 888, the old number. The third position is occupied by the Xiaomi Mi 11, followed by the Galaxy S21 Ultra, Samsung’s latest flagship. Note the appearance of the Find X3 Pro from Oppo in fifth place in the ranking.

Finally, we will notice the resistance of two old terminals : the ROG Phone 3, the powerful predecessor of the ROG Phone 5, and the Oppo Find X2 Pro, former number 1 in 2020. Despite their Snapdragon 865 and 865+ SoCs, the 2 smartphones remain in the rankings. As is often the case, the top is largely dominated by devices powered by a Qualcomm SoC, except for Samsung phones running Exynos 2100.

Now let’s move on to the top 10 mid-range smartphones. This ranking is dominated by two smartphones powered by the Kirin 985, a SoC developed by HiSilicon, a Huawei subsidiary: the Nova 7 and the Honor 30. Xiaomi’s Redmi 10X 5G, former leader of the ranking, is relegated to third place while the Redmi 10X Pro 5G, number 2 last month , is ejected from the top. What do you think of the AnTuTu rankings for the month of March 2021? We await your opinion in the comments. 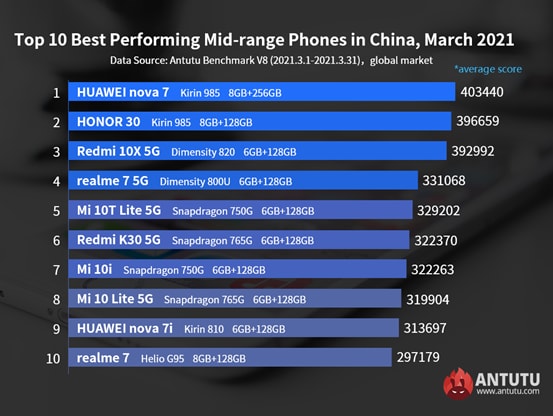 The Xiaomi Mi Band 5 bracelet for less than 30 € at Darty! – PhonAndroid